I have never owned an Indian, Triumph, BSA, or Harley.  These would be my favorites in order.

My early riding years included riding these brands, but they belonged to friends,  My one friend, whom I rode with most of the time, had a Triumph and his father had a Triumph.  So by age 14 we rode together quite a bit.  I would ride his bike and he would ride his fathers.  So that is where I found a fondness for Triumphs.  My parents would not allow me to own a motorcycle, and I had to keep them from knowing  about my riding adventures.  Most of which was on the country roads.

After graduating from high school.  (You didn’t think I got that far did you.)  I was earning $66.oo a week pre-tax.  Another friend of mine’s Dad bought him a basket case Harley.  He had been working on it for 2 years and was still not riding.  I was impatient and wanted to ride NOW.  It was a 15 mile drive to work everyday.  I did have a 1960 Chevy Convertible but I wanted to ride a bike.  At the local truck stop, the owner began selling a new brand of motorcycle.  I test drove one and really enjoyed it.  This bike had a revolutionary new concept.  It was a 175 cc, 2 stroke two cylinder, with oil injection.  This meant you did not have to mix the oil to the gas and gave you a better mixture.  A rotary valve engine, with a rotary transmission.  This meant you  could go through the gears in two ways.  1st, 2nd, 3rd and 4th.  Then return from 4th, 3rd, 2nd, and back to 1at.  OR, you could go 1st, 2nd 3rd, 4th, 1st. Without having to work your way down.  There was also a lever on the left side of the transmission, you could reach down and shift it, now you had a 5 speed transmission, but the rotary was locked out.  Oh yes it had a kick start.  Which meant sometimes several minutes of wearing down your right leg trying to start it.  (I sometimes cheated and pushed it as fast as I could, popped the clutch and away I went.

The price for this motorcycle was $695.oo.  This meant I had to borrow the money to buy it.  Not having any credit history I had to have my brother, (remember he is 10 1/2 years older than me) co-sign the loan.  If you remember I never liked buying anything I could not pay cash for.  But I could not wait that long.  I remember my payments were a whopping $50.oo a month.  (About a weeks pay.)

This bike was very versatile.  Friends with their Hondas would get together for a small hill climb event.  (Pretty small hill).  I could beat them up the hill and had my girlfriend on the back.  On the interstate, we could travel 105 mph with the two  of us on it.  And it would run all day like that.

The first night I had it I made surprising discovery.  The night I picked up my bike my friend, with the Triumph, and I went for a ride.  We were doing about 60 on a country road, when we found ourselves approaching a busy State Highway.  I released the throttle, but the bike did not slow down.  It maintained it’s rpm’s and speed.  Finally I panicked and clamped down the front brake.  I went tumbling over the handlebars. Not really it just seemed like it,  The bike nosedived and I went down.    Not injured.   I was about ready to take the bike back, and demand my money  back.  That is when I found out the little knurled knob I was playing with was a sort of cruise control.  How it worked was by turning it you locked the throttle.  It did take me a while to gain confidence in using the front brake again.

I had this bike for about 4 to 5 years.before I sold it.  I had gotten my money’s worth out of it.  It was time to move up to a larger bike.

Before I go I have to tell you this story.  Being a youngster with this bike.

At this particular time there was an outlaw motorcycle gang,  I only use this term for your reference.  They preferred to be called a club.  Anyway some of the members were riding their Harley’s and I passed them like they were standing still.  Suddenly one of the biggest bikers I had seen caught up to me, and pulled me over.  He asked, “What you got there?”  “You passed me so fast I thought my bike had stopped and started to get off”  I told him it is a Bridgestone 175 twin.  He kind of laughed.  We talked a while.  The last thing he told me was this.  “Pay no attention to others who may try to put you down because you aren’t riding a Harley, the main thing is you are riding.”  I saw these guys in town for a couple of weeks, while the trial was going on.  They remembered me and would stop to talk.  After that I never saw them again.  Oh yes, they did get a kick out of one friend I occasionally road with.  This friend was about 6 foot 3 in. tall, and weighed over 300 pounds.  He road a Honda 165 dream. (not the same one mentioned earlier). But it was a comical sight.  They never gave him a hard time either.  He was riding.

This is also the time I met my lifetime mechanic.  He had taken over the Bridgestone dealership.  He has owned 13 Harley’s but even though he hasn’t sold new motorcycles since the Bridgestone days.  He does not recommend Harley-Davidson to anyone.  He even refuses to work on them.  WHY. I don’t know. 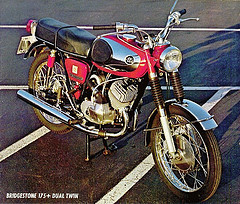 Bridgestone went out of business because, as the story I got.  The bikes were so superior to the Kawasaki, Suzuki, Honda, and Yamaha.  They were cutting deeply into their sales.  Bridgestone being primarily a Tire company, bowed out when these brands threatened to cease buying their tires from Bridgestone.

It was a great Motorcycle.

I better cut it off now. I am waaaay too long.  I will have more later if you care to check back.

Just remember what the CLUB member told me.  “It doesn’t matter what you ride as long as you ride”.

That Is How I See It.